The Chiefs’ offense continues to frustrate fantasy players with its inconsistencies, but struggles are happening all over the league.

Something about football feels off, right? Sluggish?

That’s because the first 6 weeks of fantasy scoring are the lowest in THIRTEEN YEARS. Down 22% from last year

We’re seeing it in the primetime games. There’s a severe shortage of consistently high-powered offenses

Needless to say, this comes as a surprise since the NFL has been an offensive-driven league for so long. It will be interesting to see if offenses start to heat up or if defenses get even stronger as the weather cools off.

This week Kansas City takes on yet another opponent with a stifling defense in the San Francisco 49ers. Let’s jump into this matchup and see who to start and sit for both teams.

*Projections from our colleagues at The Huddle

Mahomes has steadily remained in the top five amongst quarterbacks in fantasy. He has a tough matchup against a good 49ers’ defense this week, but he has risen to the occasion against top defenses this season.

San Francisco could be without starting cornerback Charvarius Ward and starting safety Talanoa Hufanga, which would be a significant blow to its secondary and provide Mahomes opportunities down the field. 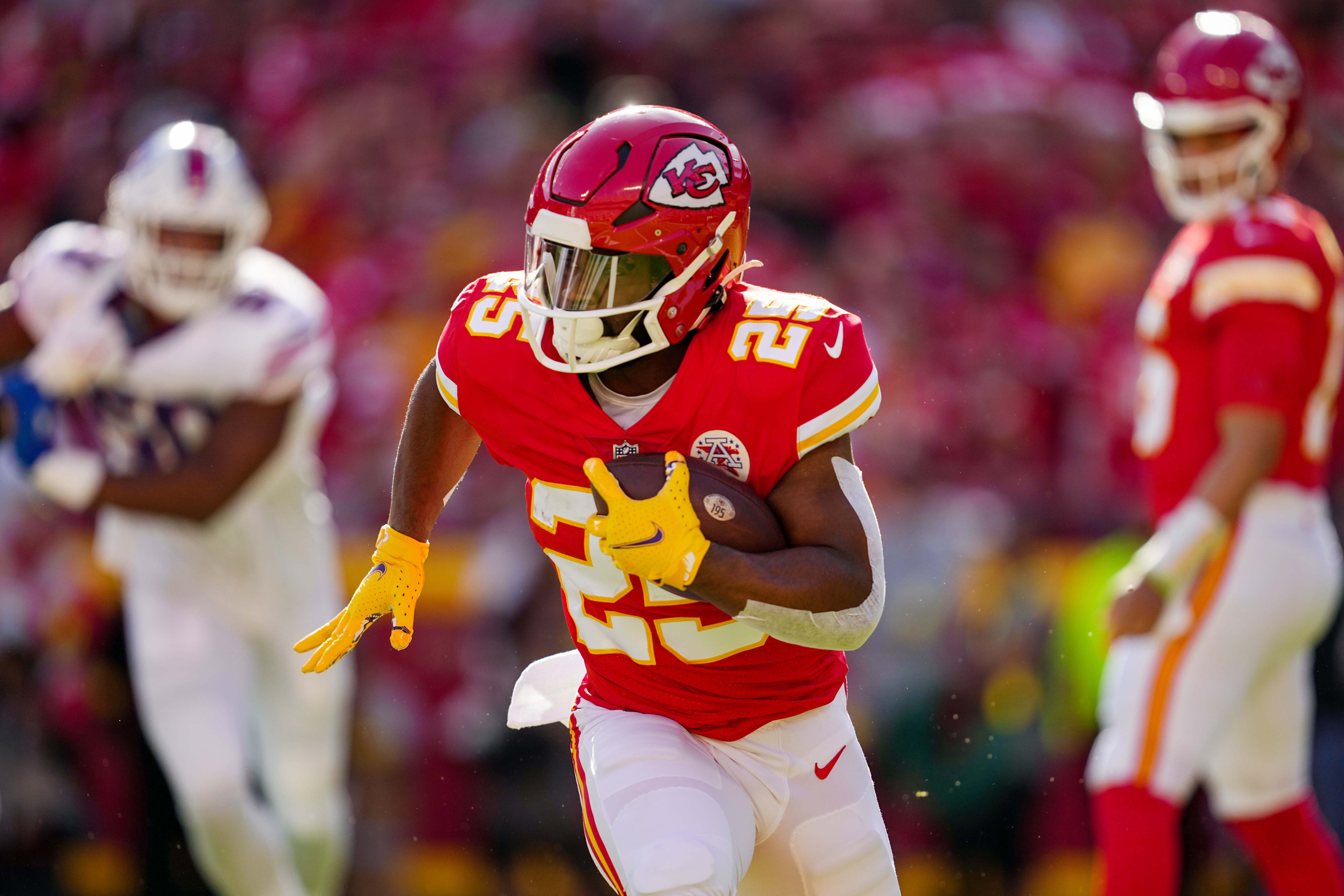 Three of the last four games for Edwards-Helaire have produced very low rushing totals. He’s usually able to round out a decent fantasy point total by contributing in the receiving game, but he was held without a catch last week for the first time this season. He has also been held out of the endzone each of the last two weeks.

With a tough matchup against a great 49ers’ front seven, Edwards-Helaire is a low-end flex play this week. As for Pacheco, he’s only gotten significant work during garbage time this season. He does lead all Chiefs’ running backs in yards per carry, but until he can consistently cut into Edwards-Helaire’s workload there is barely an argument to roster Pacheco at this time. 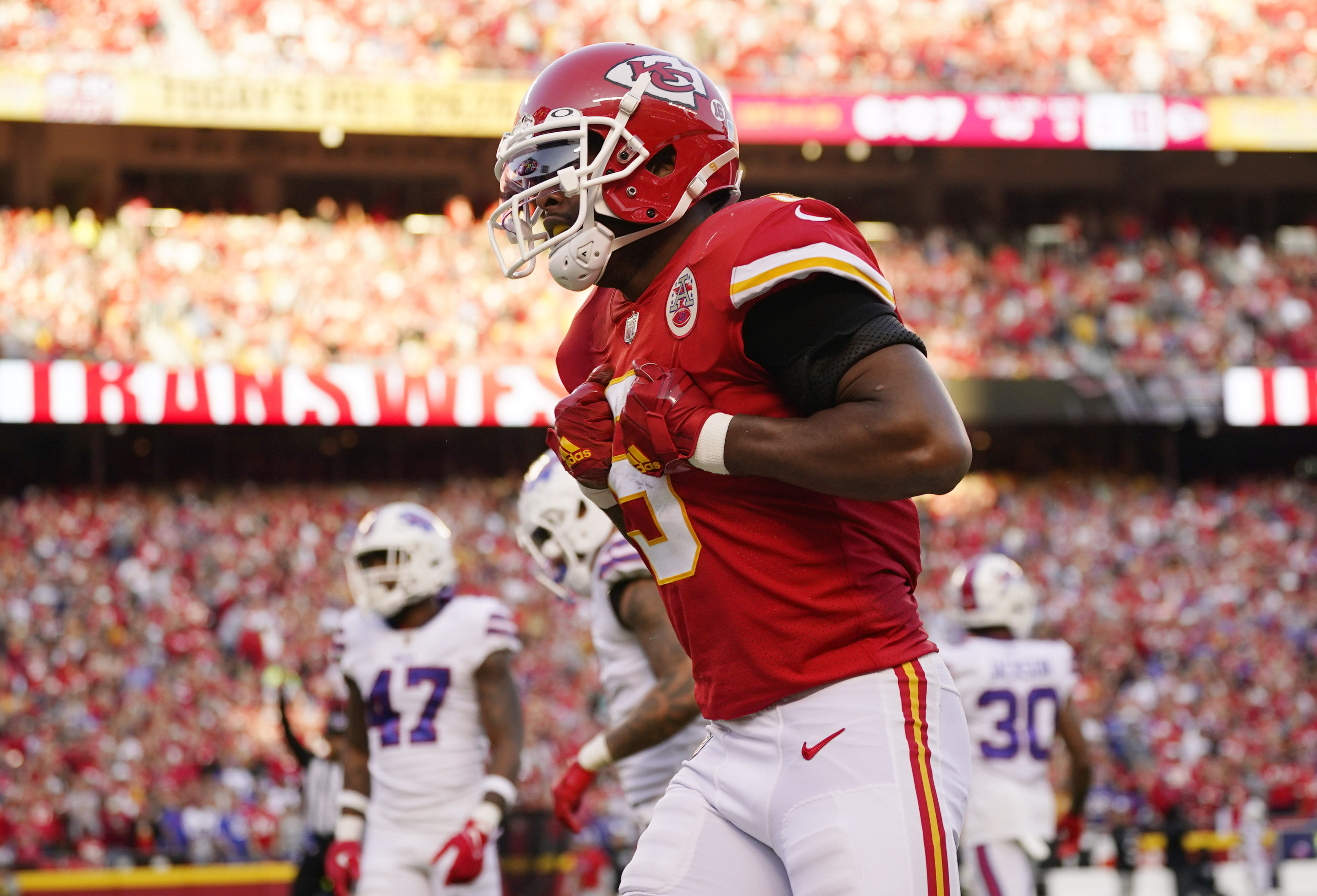 After having his best game in a Chiefs uniform against the Raiders, Valdes-Scantling was held without a single catch against Buffalo. He also saw a season-low three targets. That is surprising and somewhat concerning considering Mahomes threw 40 passes in that game. Valdes-Scantling should definitely not be considered for any lineups against the S.F. secondary.

Hardman is averaging 3.5 catches per game this season and is good for the occasional touchdown, but that’s not nearly enough to warrant being in any lineups. The Chiefs haven’t been very creative with Hardman either as he has just two rushing attempts for three yards. He’s best left on waivers. 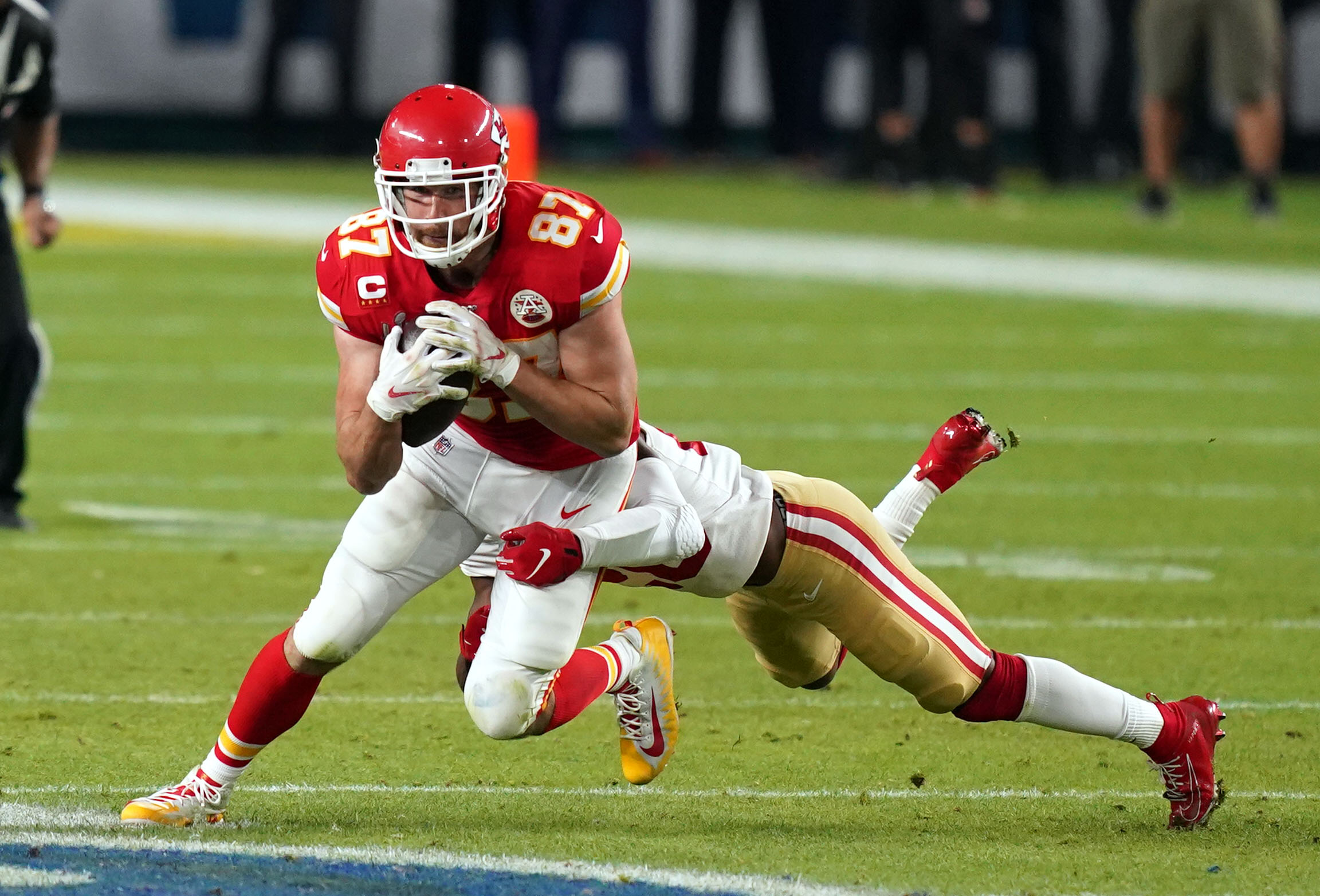 Kelce has at least seven catches in all but two games this season. He leads all tight ends in all major categories and has steadily paced the position in fantasy all year long. The 49ers gave up two touchdowns to Atlanta Falcons’ tight ends last week, if you needed any extra excitement about Kelce being in your lineup. 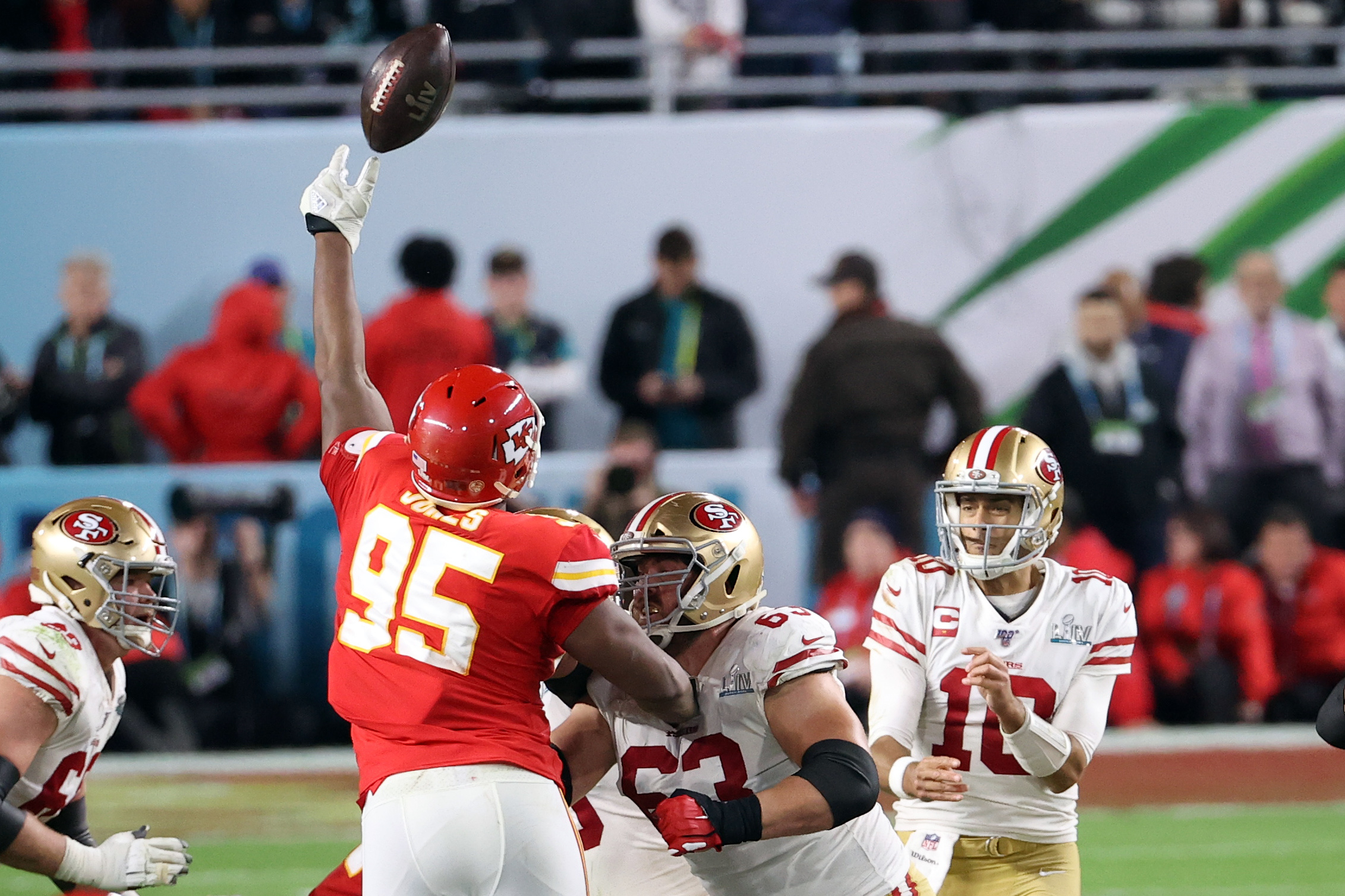 After a hot start, the Chiefs’ defense has cooled down as of late, although it played admirably against the Bills last week despite being down multiple starters. The 49ers are fairly conservative offensively, but the Chiefs aren’t getting sacks or forcing turnovers at a high enough rate.

Leave the K.C. defense on your bench, but stash it for later as it could get healthy and become productive again down the road. 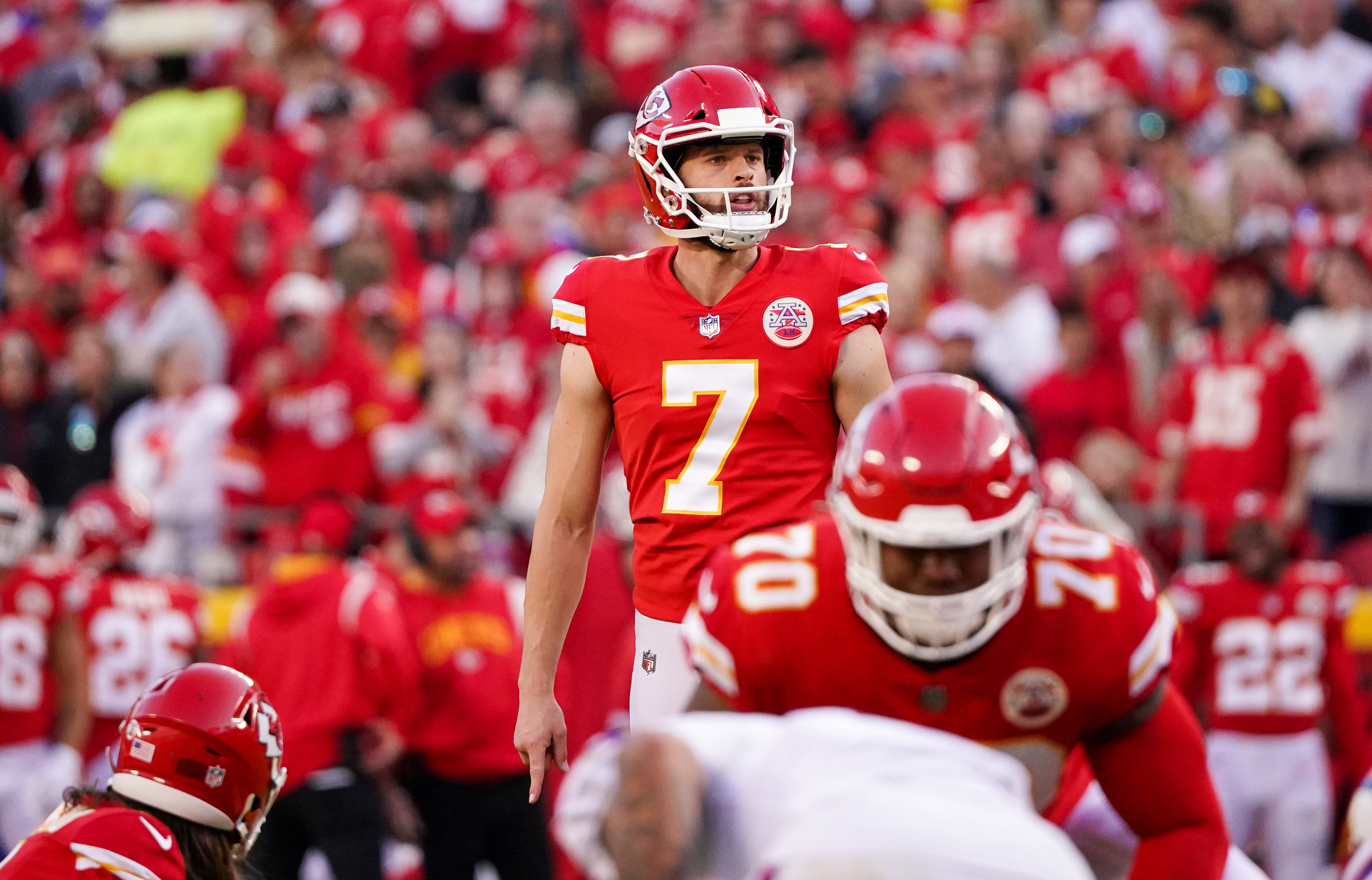 In his first field goal attempt since Week 1, Butker nailed a 62-yard attempt against Buffalo last week. He added another 44-yarder but missed a 51-yard attempt. He experienced no setbacks this week and appears to have put his ankle injury fully behind him. Butker should be in your lineup every week. 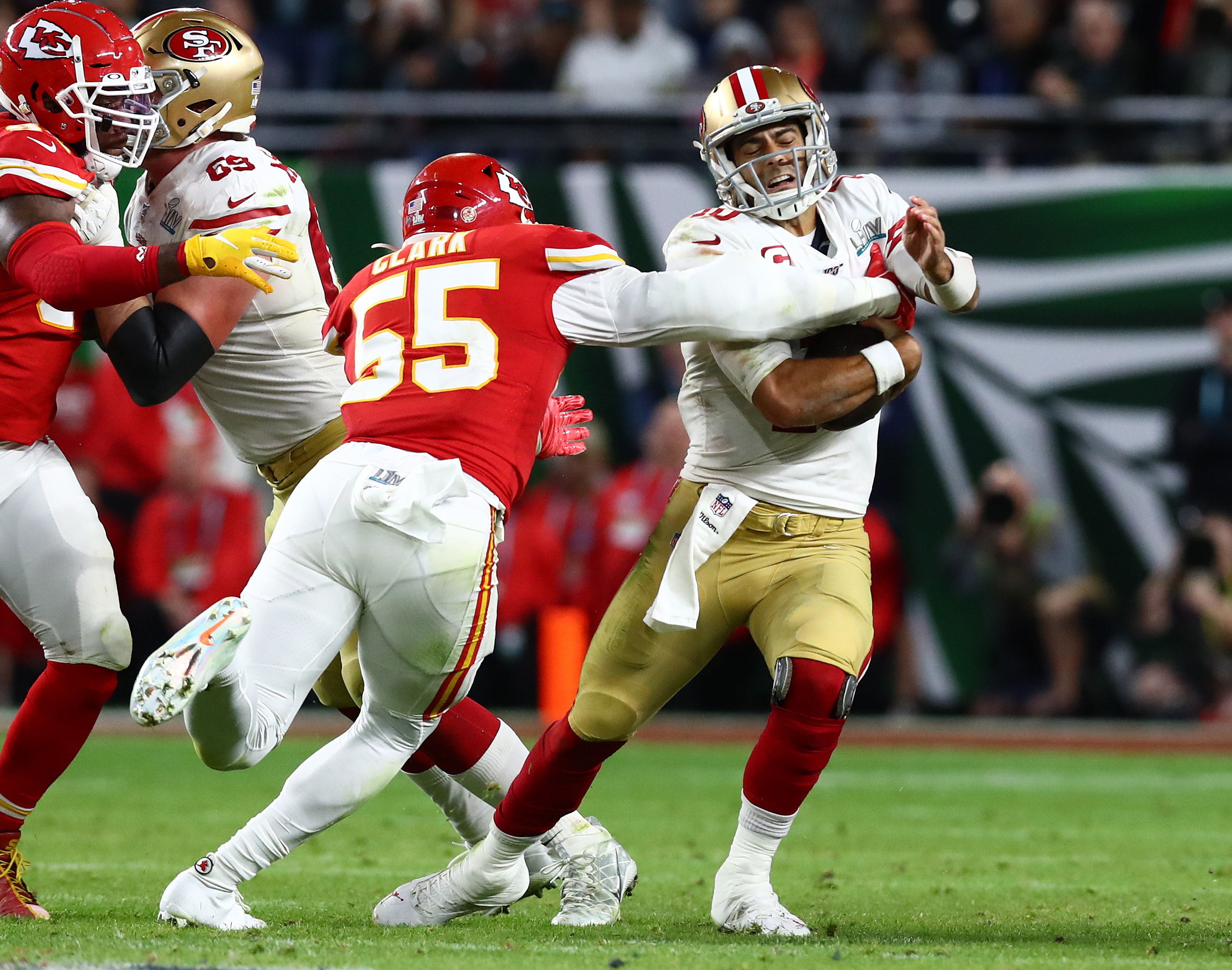 Last week Garappolo threw for a season-high 296 yards, but he also threw two interceptions. He is pretty much the poster child for a high-floor, low-ceiling player. The 49ers are a run first offense that doesn’t stretch the field vertically very often.

If the Chiefs’ offense is clicking it could force Garappolo to be more aggressive, but he hasn’t been the shootout type very often in his career. He’s a decent play if you’re starting quarterback is on a bye or if you’re in a league that starts two QBs. 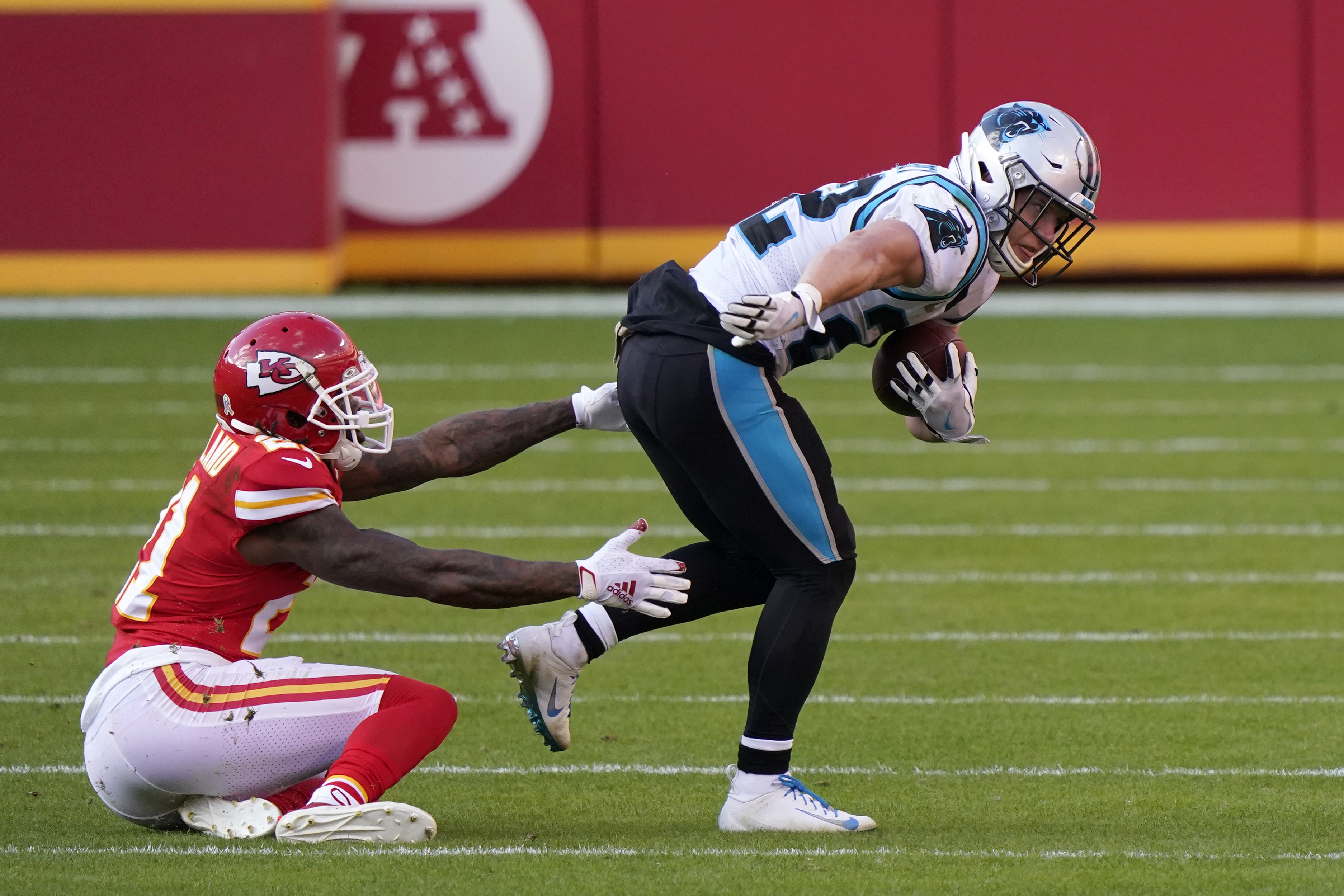 The 49ers shockingly acquired McCaffrey late Thursday night and he could suit up and play against the Chiefs on Sunday, although it seems unlikely. Even if he does, it will likely only be a snap or two. Leave McCaffrey on your bench this week, but exciting times are ahead for him in Kyle Shanahan’s offense.

With the 49ers having to play catchup last week Wilson Jr. received a season-low seven carries for just 25 yards. Don’t be discouraged, however, as he has managed to score double-digit fantasy points in all but two games this season.

Wilson Jr. should get back to his usual volume of work and the Chiefs’ run defense has been trending downward the last few weeks, making him a solid RB2. 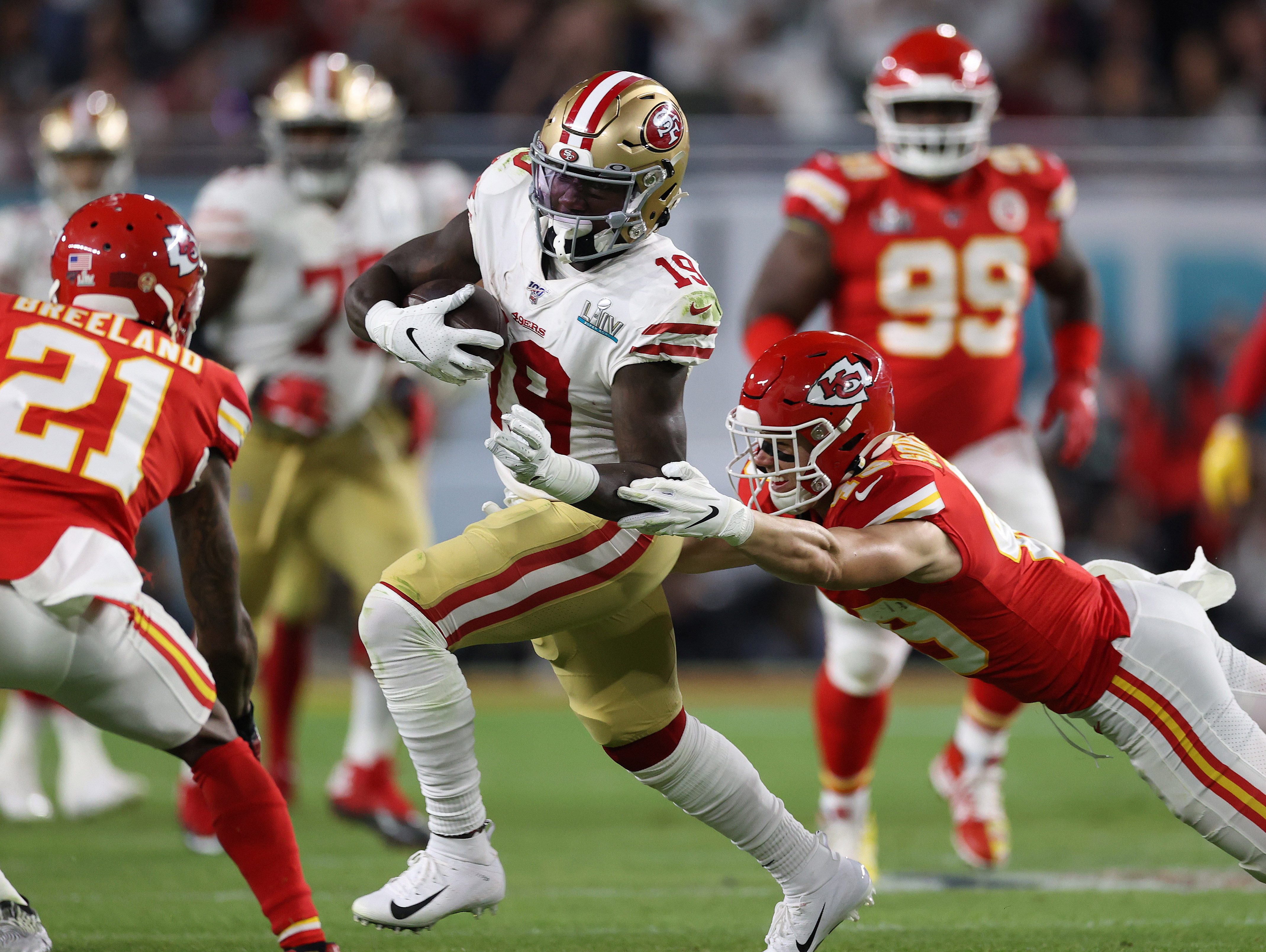 By the standard he set last season, Samuel hasn’t had many big games thus far in 2022, but he has been a steady contributor in the S.F. passing game. Things should really open up for him once the 49ers get McCaffrey going. Regardless, Samuel is an elite talent and should automatically be in all lineups.

After a bunch of middling performances, Aiyuk exploded last week with eight catches for 83 yards and two touchdowns. At this point that seems like an outlier, but a matchup against a young and struggling Chiefs’ secondary justifies Aiyuk as a flex play this week. 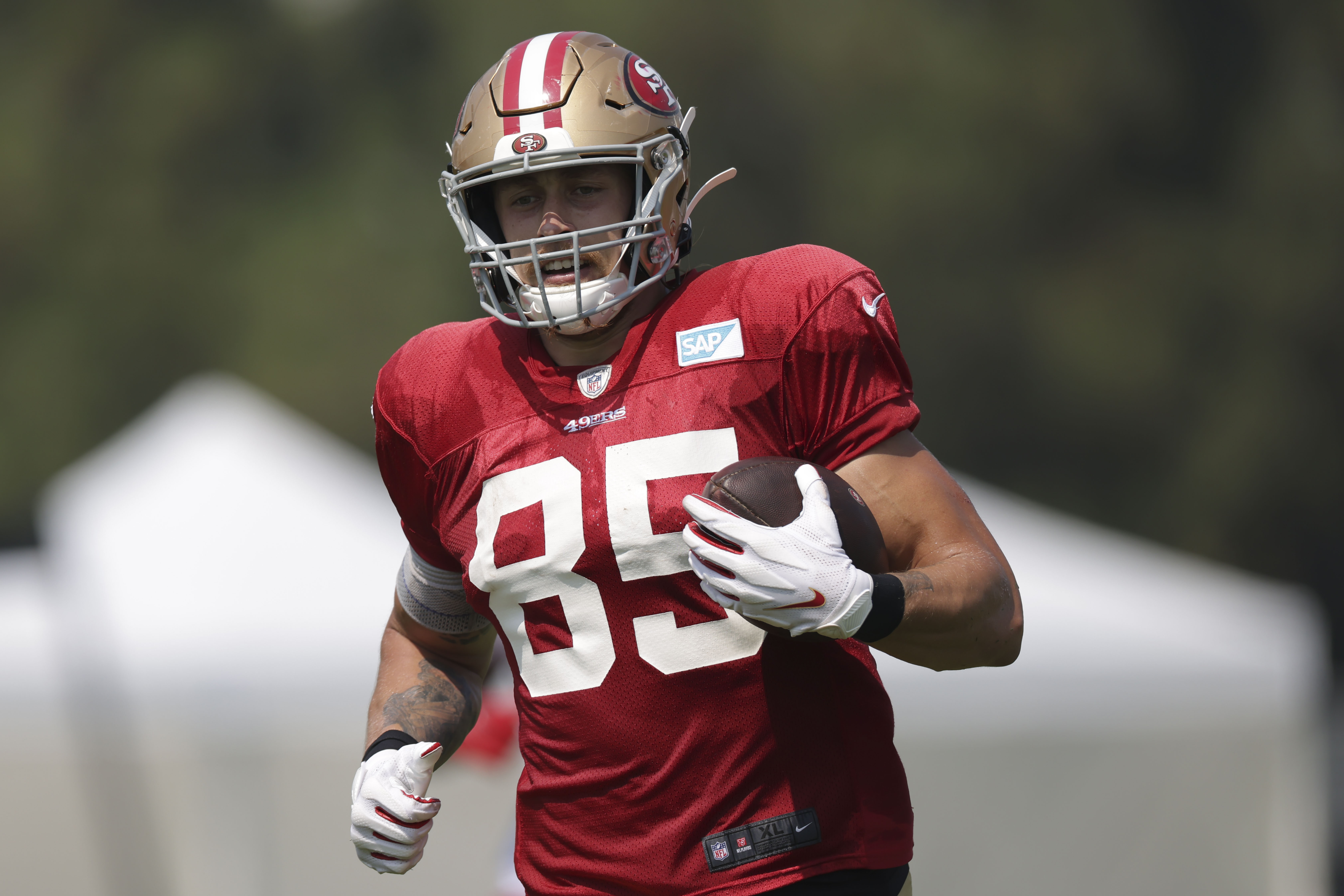 In a strange coincidence with Aiyuk, Kittle also caught eight passes for 83 yards last week, although Kittle didn’t hit paydirt. The 49ers are hoping with that performance that Kittle is getting his groove back and is fully healthy.

After dominate seasons in 2018 and 2019, Kittle has battled injuries and inconsistencies in his game. The Chiefs are allowing an average of 13 fantasy points per game to tight ends this season, making Kittle a very good play this week. 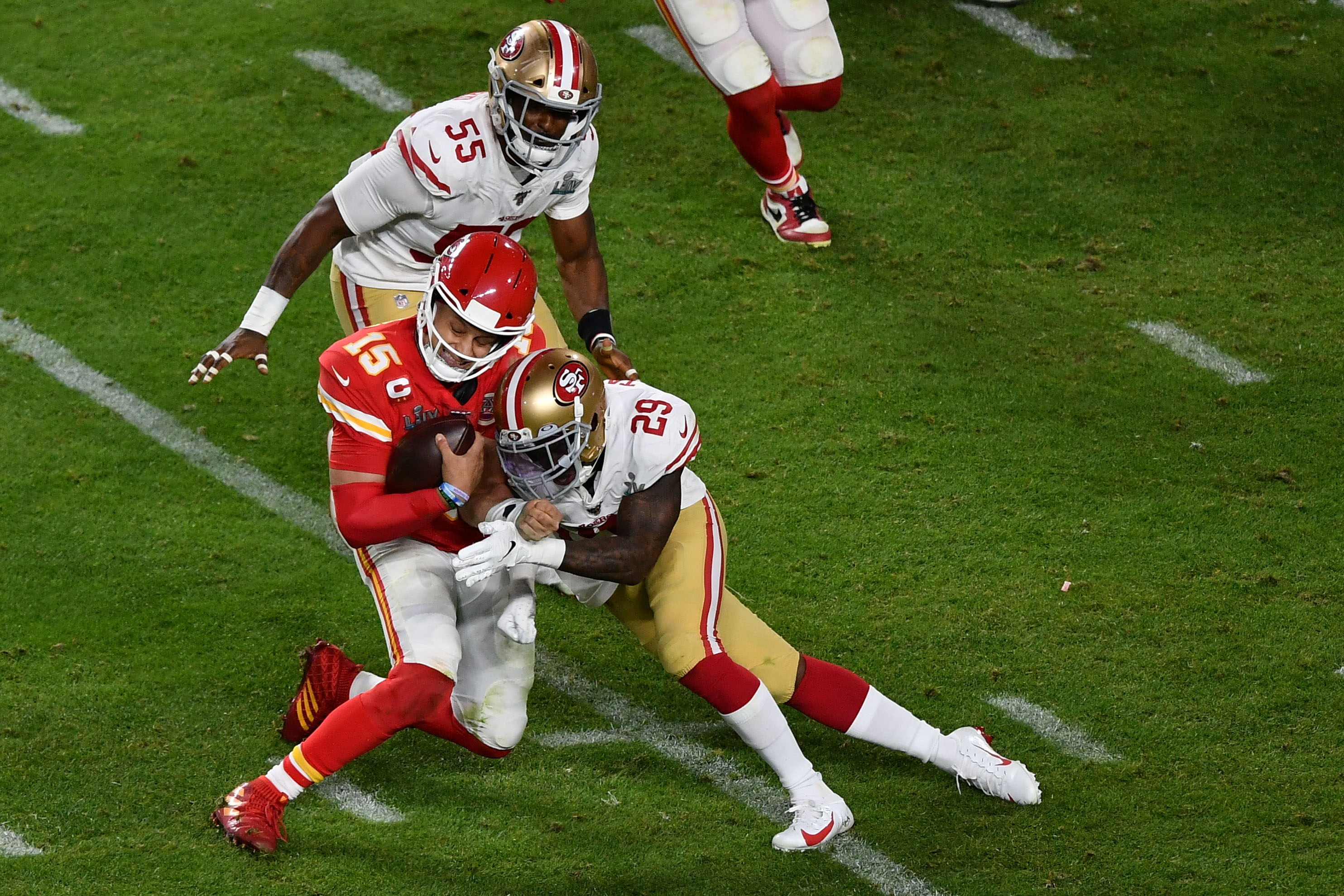 The 49ers’ defense failed to reach double-digit fantasy points for the first time this season against the Falcons, but just barely. It is one of the best defenses in the NFL, ranking second in pass defense, second in rush defense and second in sacks.

The Chiefs’ offense has put up good numbers overall on the season, but has been tough to gauge on a week-to-week basis. There’s certainly some risk starting the S.F. defense this week, but it’s a proven enough unit to be in lineups if you don’t have any better options. 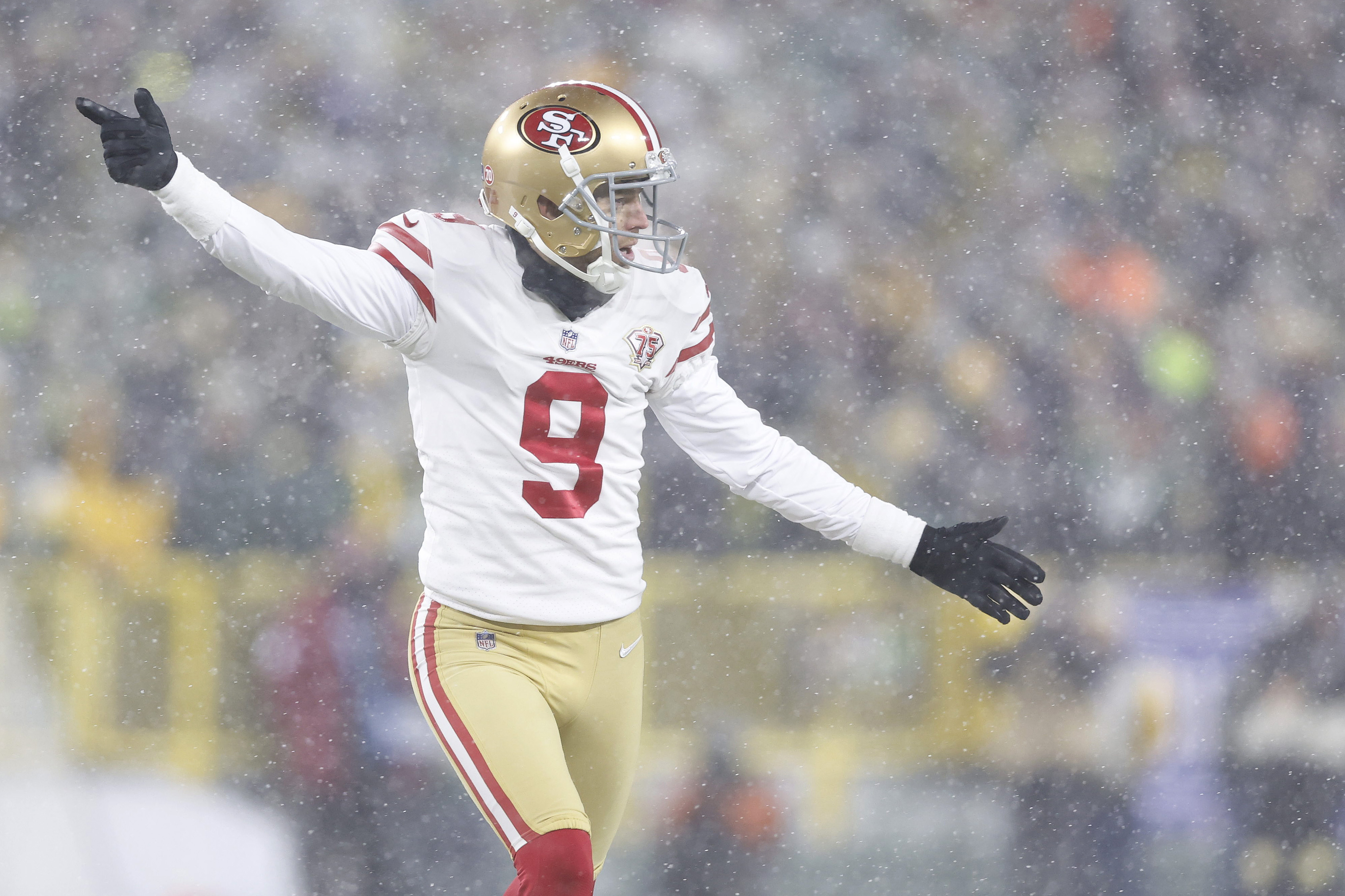 Gould ranks in the bottom third of the league with just six field goals made this season. He has also missed three field goals and is battling through a knee injury. To top it all off, the 49ers’ offense ranks 20th in scoring. Gould should not be in any lineups or rostered.