How can media companies get on the path towards becoming greener by improving sustainability, reducing power consumption, and becoming greener? Tim Siglin, Founding Executive Director, Help Me Stream Research Foundation, and Contributor Editor, Streaming Media, sits down with Barbara Lange, Principal and CEO, Kibo121 to discuss the ways that her organization is working towards helping companies achieve these goals.

“So Barbara, tell me a little bit about your background and then let’s talk about power consumption,” Siglin says.

“My name is Barbara Lange, and I am the CEO of Kibo121, a consultancy to help media technology companies on their paths of sustainability,” Lange says. “I just started in January. Prior to that, I spent 12 years as the Executive Director of SMPTE, I’m sure most of your viewers will know that organization. It’s a hundred-year-old organization that does a lot of good in terms of education around motion imaging technology, and also an international standards body. So, I got to know the industry and turn my attention now to help it to become more green.”

Siglin says, “You mentioned the hundred-year thing. It made me think of my very first production company…[it] was called Century VII…because we started it in the hundredth year of film. And film has been described as the seventh art.”

“So sustainability and power consumption,” Siglin says. “Why should companies in the industry care about that?”

“It’s a good question,” Lange says. “You know, this internet computing technology (ICT) sector is certainly not the biggest contributor to carbon emissions in the world after transportation and energy and electricity. But we do take part in transportation, flying around the world. We do power everything through electricity. So we are contributors. And the fact of the matter is every industry needs to care about sustainability in the long run because we’re all in this together, we have only one planet. And I think the interesting thing is that it’s not a new idea, but it’s only now coming into the consciousness of this industry. And what we’re learning is that being green is all about being efficient. And, you know, everybody wants to be efficient. It’s a cost-savings thing. So I think there’s a good synergy between how you can run an efficient business and [be] conscious of your cost and really contributing to a greener future.”

Siglin notes, “One reason it’s come into the consciousness is we’ve sort of done what we said we were going to do 20 years ago, which is revolutionizing the way that people consume content. So now that we’re there, some of the companies are public companies, and you mentioned in the panel that…the SEC is starting to sort of essentially legislate them into thinking about this. Can you talk a little bit about Environmental, Social, and Corporate governance (ESG), I think you said Sector 3…?

“Scope 3,” Lange says. “Firstly, the United States is about five years behind Europe. Europe has had many years already of regulatory requirements on it. So we’re learning a lot from what has gone on in Europe, and it’s the investor community who are paying a lot of attention to ESG investing. And it’s a bit messy because the ways in which companies self-report is not consistent. And so that all needs to be cleaned up. But one of the things that the SEC is doing to contribute to that, or to help clear that up, is to require companies to have sustainability metrics as part of their financial filing. That is something that is due…they say by the end of this year, to take effect…with the 2024 filing year. Now, whether that actually happens on that timeline, I don’t know, but it will happen, if not then, shortly thereafter. And what that means is that public companies are going to have to understand their Scope 1, 2, and 3 measurements. So Scope 1 is measuring their carbon emissions of their operation. Scope 2 is what kind of energy are they using to do their business? With the goal of more renewables…and Scope 3, which oftentimes…80% of their entire measurement is their supply chain. And so even these small little companies who say, you know, ‘I’m not being mandated.’ No, you’re not, but you’re a Scope 3, with somebody else you have a contract with. And it’s already happening in the broadcast industry, where RFPs are requiring vendors to highlight something that they’re doing around sustainability. So it’s [the] early days here in the US in this regard and certainly in our industry, but I do believe it’s just the beginning.”

Siglin says, “Well, they often say the things that you want to change you can change by starting to measure this. So how do we measure that? I know there were a couple of things we talked about on the panel around the number of megabytes delivered per watt or something like that. But what are some other ways, say from the production side of the house…that would be good ways to think about measuring?”

“It’s a very good question and it too is a bit messy in terms of standards or best practices around how you measure these sorts of things,” Lange says. “I like to look at the content or the workflow from a content creation standpoint, a content manipulation standpoint or phase, and then a content distribution phase. If we look at those three phases, generally speaking, content creation is where content is being, you know, onset shots. And there’s a lot of work and measurements there from using e-vehicles for your talent [or] from not using single-use plastics. There are different groups that are certifying green productions. Albert, out of the UK. Another group in the US is the Green Production Guide. So product and also virtual production. Big savings in transportation costs. Although there is a question about whether the LED panels counter that, nevertheless there’s a lot of work going on in greening up production.”

Lange continues, “I’ll skip manipulation for a second and go right to distribution, where groups like Greening of Streaming looking at how to measure in an accurate way, and then also be on a regular reporting mechanism. So there’s some work going on in that space. The middle part, this manipulation part where all the content is digital, it’s in the cloud, it’s being touched by a million different organizations…who owns the content, who’s responsible for the energy is very messy. And that is a space where it needs to come together and kind of sort that through and figure out what’s the best way so that you can be assured your production, from the very beginning to the very end has a proper carbon emission measurement. And that’s still a little bit down the road.”

“Yeah. It sounds just complex,” Siglin says. “Even planning at this point. Well, I’m glad you’re on the task, with your new company, of actually starting to help companies look at that, and I very much appreciate your time.”

Learn more about the greening of streaming at Streaming Media East 2023. 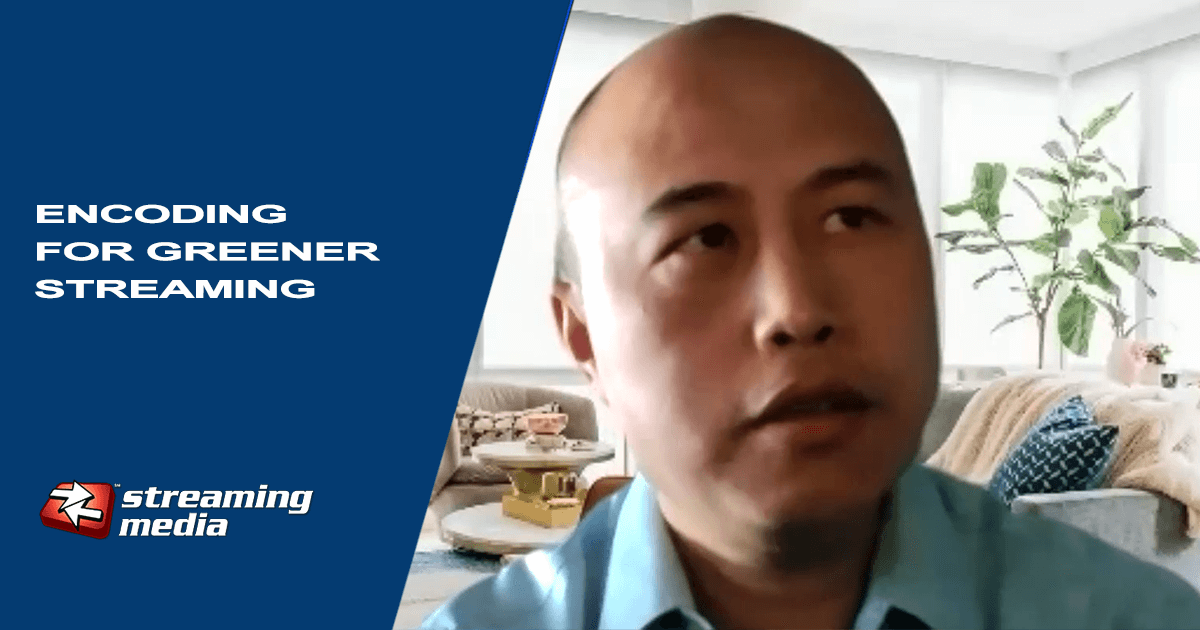 Choosing a Codec for Greener Streaming

What are the current innovations in reducing the carbon emissions and the carbon footprint of streaming? Jan Ozer of the Streaming Learning Center asks Kevin Yao of Amazon Web Services and David Ronca of Facebook about the innovations and new technologies their organizations are using to lessen the environmental impact of streaming. 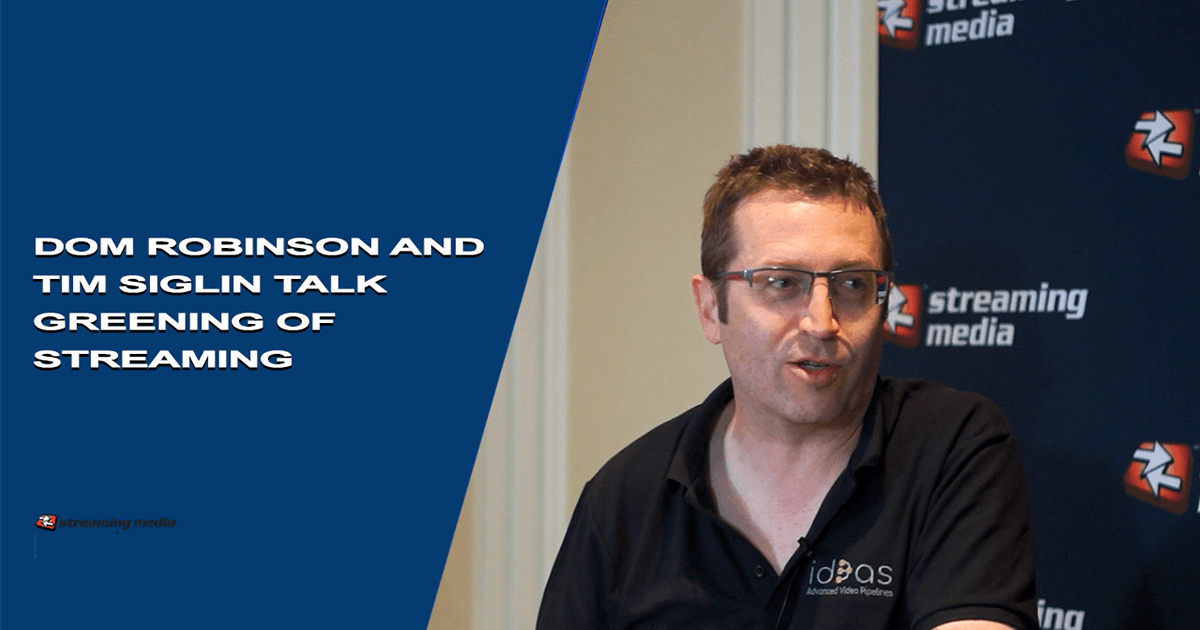 From The Rings of Power to The White Lotus, here are our top TV picks of 2022

From The Rings of Power to The White Lotus, here are our top TV picks of 2022