Blackmagic now has eight different models of ATEM Mini and ATEM SDI all-in-one video switchers in the mini desktop form factor. Starting with the $295 ATEM Mini model that was first announced in September 2019 and all the way up to the $1,295 ATEM Mini Extreme ISO (Figure 1, below) and $1,495 ATEM SDI Extreme ISO (Figure 2, below Figure 1), there are so many options that one can be forgiven if they don’t know where to start when selecting the correct one for their workflow needs. I’m going to spend a bit of time talking about the entire line before focusing on the two Extreme ISO models.

What Is an ATEM?

Having this many models has also made for confusing naming conventions. The original ATEM Mini line features HDMI inputs and outputs. Once that line was built out with five different models and 10 HDMI connectors on the two Extreme models, it felt to me like it had outgrown the term Mini. The newer SDI line dropped the term Mini altogether and features only three different models. I think if Blackmagic could have a redo on its model naming, it would have never used the term Mini and opted instead for HDMI on the Mini line to be more consistent with the SDI line.

Anytime you see the term ATEM Mini, it is an HDMI switcher, while ATEM SDI is an SDI switcher. The base models start with four video inputs, and the Extreme models have eight inputs.

The term Pro is for models with hardware streaming, multiview, and H.264 program recording on USB-C drives. ISO models add ISO recording of all of the video, audio, and graphics inputs. The Extreme models have all of the features of the Pro models but add a SuperSource multilayer processor.

To clarify, there are no HDMI outputs on the SDI models, including for the Aux outputs that can be programmed to display the preview, program, multiview, or loop-out of any of the inputs. If you plan on using an HDMI monitor with the ATEM SDI models, then you will need an SDI-to-HDMI converter. Blackmagic has a whole line of broadcast converters like the Micro Converter SDI to HDMI or Micro Converter BiDirectional SDI/HDMI (Figure 3, below) in both 3G and 12G flavors for HD or 4K workflows or the Teranex Mini line of converters.

The number of Aux outputs varies between the Mini and SDI lines on similar models. The Mini has a single HDMI output, and the Mini Extreme has two HDMI outputs. The SDI line has twice as many Aux outputs, with the SDI and SDI Pro ISO both having two and the SDI Extreme ISO having four. All models have at least one USB-C webcam program output, while the Extreme models have two USB-C outputs that can be used for external drive recording, webcam program out, connection to a computer for the Software Control panel, and cellphone tethering while streaming.

I’m going to start my overview on the rear input and output connection end of these switchers. Starting from the left side (when facing the rear of the switcher) is the locking power connector. The eight-input Extreme line requires 36 watts of power, which is twice as much as the 18 watts on the four-input models. The power supply connection is the same locking design, so if you have multiple models, like I do, you don’t want to mix them up (Figures 4 and 5, below).

In addition to the two USB ports and HDMI or SDI outputs and inputs that are found on the back of the unit, there is also an Ethernet port. Each video input has internal re-sync and a frame rate and format converter—which means you can mix and match resolutions and know that your source refresh is locked and won’t drift.

Do note that the SDI models are deeper units, as the male 3G SDI spigots stick out, while the female HDMI connectors do not. The 0.57″ (or 14.4mm) difference isn’t significant except when you try to accessorize the SDI models with custom transport cases or 3D-printed stands that were designed for the HDMI models. I know this firsthand, as I have a beautiful SKB iSeries Case for ATEM Mini Extreme (model 3I-17066ATM), with a custom-cut PE foam interior that won’t fit the ATEM SDI Extreme ISO. In addition, HPRC has the AME-2500-01 case for the ATEM Mini Extreme, with pre-cut foam that also won’t fit the ATEM SDI Extreme ISO.

There are two 3.5mm stereo audio inputs on the rear of the switcher. I would have preferred a single mono XLR input in that space for my workflows with a soundboard, but in this small form factor, tough decisions with trade-offs have to be made, and some producers may prefer the four channels of 3.5mm audio inputs over a single balanced mono XLR input—or dare I suggest a pigtail with a pair of mini XLR inputs. Actually, let me take that one back—I don’t want a mini XLR pigtail connector. The eight-input Extreme models also have a stereo 3.5mm headphone output, a feature that’s missing from the four-input models. One really nice feature on the analog audio inputs is that you can add up to six frames of delay in case the video and audio sync is a few frames off. 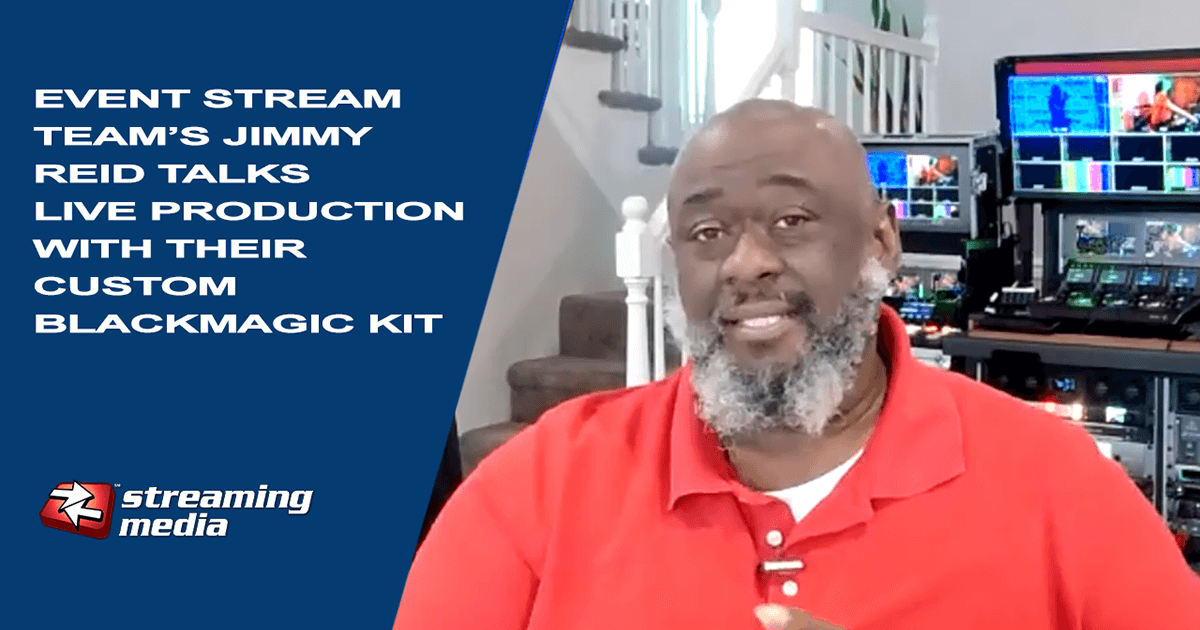 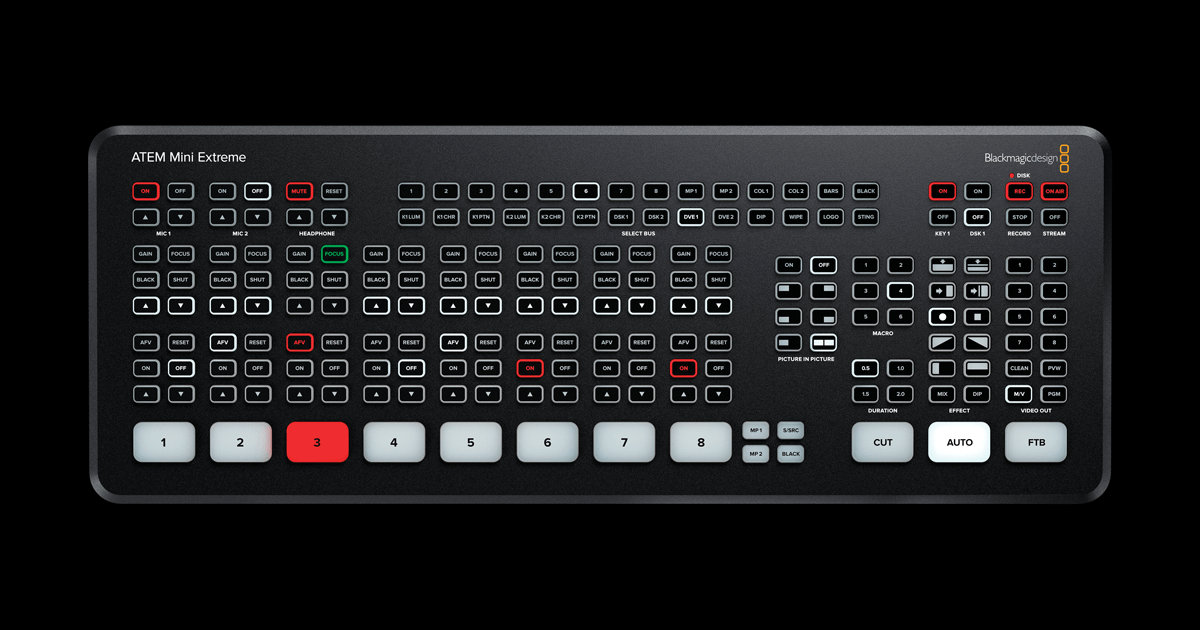 Blackmagic Design calls its PxP feature SuperSource and it used to only be available on their highest-end switchers, the ATEM 2 M/E Production Studio 4K, ATEM 4 M/E Broadcast Studio 4K, and ATEM Constellation 8K. While much of the workflow is the same as we will discuss here, in this tutorial, we will be discussing SuperSource on the newest and more budget friendly ATEM Mini Extreme and ATEM Mini Extreme ISO video switchers. 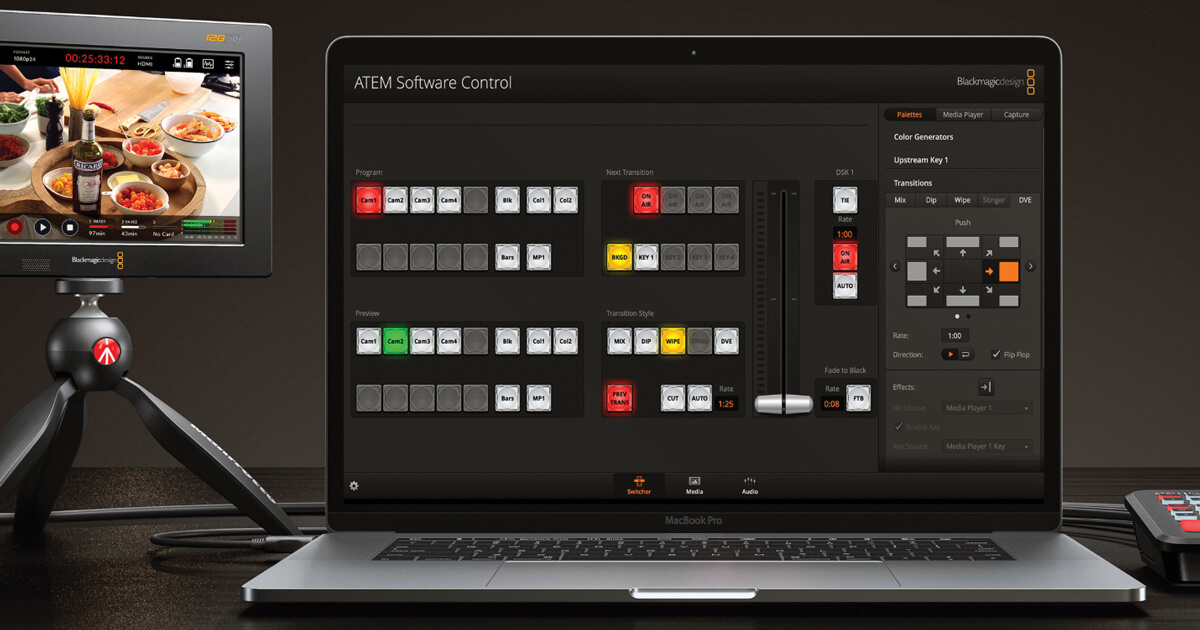 With their new ATEM Mini video switcher, Blackmagic Design has packed thousands of dollars of value into a $295 appliance that costs less than buying many of its individual constituent parts. 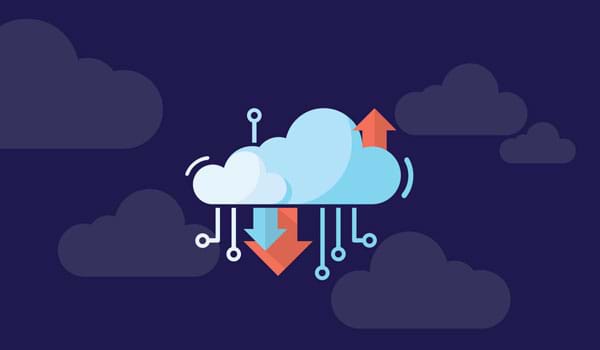 This is the first ATEM model that isn’t a rackmount switcher but rather an all-in-one switcher with hardware control panel.

Michelle Yeoh back in action as an elf warrior in The Witcher: Blood Origin

Michelle Yeoh back in action as an elf warrior in The Witcher: Blood Origin