Tim Siglin, Founding Executive Director, Help Me Stream Research Foundation, and Contributing Editor, Streaming Media, sits down with Mike Nann, CMO, MVD (Magewell Distributor) to discuss Mike’s long career in the streaming industry and the technology he is currently working on at MVD.

“Mike, you’ve been in the industry for quite some time, haven’t you?” Siglin says.

“I like how you phrase that, that’s a marketing expression,” Nann says.

“Give me some of the companies you’ve worked with before,” Siglin says.

“Well, actually my first exposure to streaming was back when I was with Digital Processing Systems because that was right around 1999, 2000, when streaming was big. We had some digital disc recorders and we started building some streaming capabilities into those as well, right out of the editing system. For me, that was my first exposure. Windows Media was the thing, though. Over time, I worked for Leach Technology, which got bought by Harris and then ended up being the marketing leader for Digital Rapids. So Digital Rapids was really the heyday of the streaming boom. We were doing a lot with media and entertainment companies. As you know, the big boys started realizing the revenue potential of streaming of the technology.”

“And so then you went off and did your own thing, and you started doing marketing for a number of different companies,” Siglin says. “One of which was a company called Magewell, and for anybody who’s not familiar with Magewell, do you want to just describe briefly what they do?”

Nann replies, “When I started working with Magewell, their biggest product line was capture cards. They had PCI Express capture cards that went in and the whole idea was bridging signals with software. I mean, as much as they’re a hardware company, they saw that the future was software. And you were starting to see streaming solutions like the wire casts…and so forth, really taking hold. [Whereas] a lot of capture card companies were focused on video editing and postproduction, they really focused on the streaming space and optimizing what they were doing to work with those solutions. So they started with the PCI Express capture cards, and I think a big tipping point for them was their USB capture dongles. They had the ability to bring in AV signals, first HD, but then even 4K right over USB 3.0, which is pretty impressive.”

“And because they had the hardware capability of that capture dongle, knowing that USB 3.0 couldn’t carry a full uncompressed 4K signal, they were able to do some basic compression right there in that box, which was about the size of a tiny matchbox,” Siglin says.

“Exactly,” Nann says, “Or a business card. So, those devices have ended up continuing to be very popular. We still sell a ton of those. Now, I still work with Magewell, and one of their newest boxes is the idea is to take that to the next level. So their biggest new announcement this year has been a product called USB Fusion. Now the key is the USB capture dongles are a single input channel. Now, streaming’s become so ubiquitous [with] video conferencing and virtual events. Keeping the audience engaged really needs more than just one input source now. So at its most basic level, this USB Fusion product has three inputs, and you can switch between any of them on the box itself, and then bring that into software.”

“One of the reasons we were sort of stuck to a single encoder for USB was oftentimes the operating systems wouldn’t allow you to plug multiple USBs,” Siglin says. “Because they were looking for one video feed off of it. So you’re saying they moved that off the USB into the box? The box itself is where you make the decision.”

“The box itself can serve as a switcher, and then you’re switching within the box and then one signal comes over USB,” Nann says. “The other thing it does though is you can combine any two of those inputs with picture-in-picture or side-by-side, so it is serving as a mixer, and then again, bring that over USB. Now, they went further – so that’s what the hardware itself can do. Now there’s a companion tablet app that allows you to also upload into the box and then switch between prerecorded sources, video clips, audio clips, and PDFs. And it even lets you actually take tablet notes or draw right on the video live in real-time. So you can actually do like sports telestrator-type stuff, football plays and so forth. That’s all part of this USB Fusion product. Huh. And again, comes into USB, right into Windows, Mac, or Linux software.

“Well that’s actually very intriguing because I can think of a number of use cases for that,” Siglin says.

“Every time we show it, another customer comes up with a new use case we hadn’t thought of before,” Nann says.

“And of course then they also did the Ultra Stream, which was the sort of standalone, really simple streaming box that once you set your Facebook Live or YouTube Live, you could then just literally touch a button and the thing would begin to record. Is that product line still out there?” Siglin asks.

“Very much so,” Nann says. “We still position that for those who are new to streaming or have basic streaming needs. Then came the Ultra Encode family, which was for more professional use cases, people wanting to web into the interface, you know, tweak the settings more. And then just three months ago we announced the Ultra Encode Okay, that’s AIO being you know, all AIO. It’s got HDMI and SDI both in the box. And like the USB Fusion, you can actually combine those into one stream if you want to. It also can do 4K encoding at 30 frames a second, it has file-based recording like the Ultra Stream did, and it can do higher streaming bit rates and more simultaneous protocols. Interesting. So you’ve got SRT, RTMP, HLS, and even TV ISSP format if you want to interface with their broadcast hardware.

So now MVD…have been sort of the sole distributor for Magewell in the US…but as I understand it, especially since you’re wearing the MVD shirt, that means that you’re actually now part of MVD,” Siglin says.

“Exactly,” Nann says. “The transition there is a gentle one for me, but you know, there are some big things going on because MVD is the exclusive distributor of Magewell for the Americas, so North and South America. But they also carry a number of other product lines, and they keep focusing on the live streaming and video production space, and video conferencing obviously in Pro AV, bringing on new product lines that complement the major ones.” 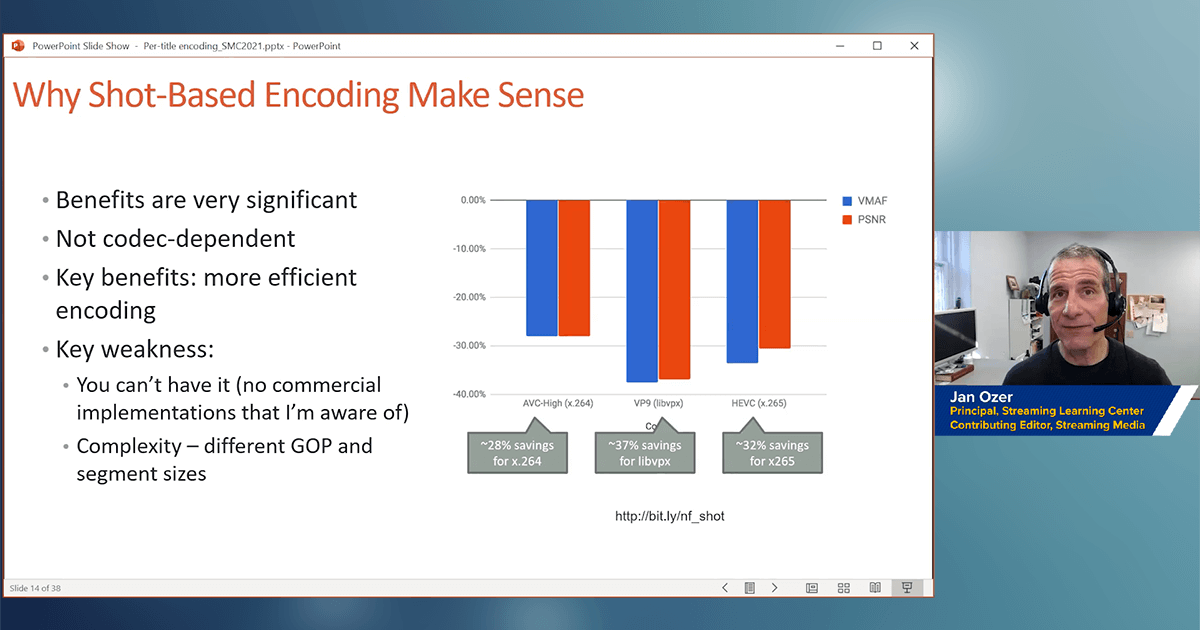 The Case for Shot-Based Encoding

Streaming Learning Center’s Jan Ozer explains how Netflix’s shot-based works and explains its benefits in this clip from his presentation at Streaming Media Connect 2021. 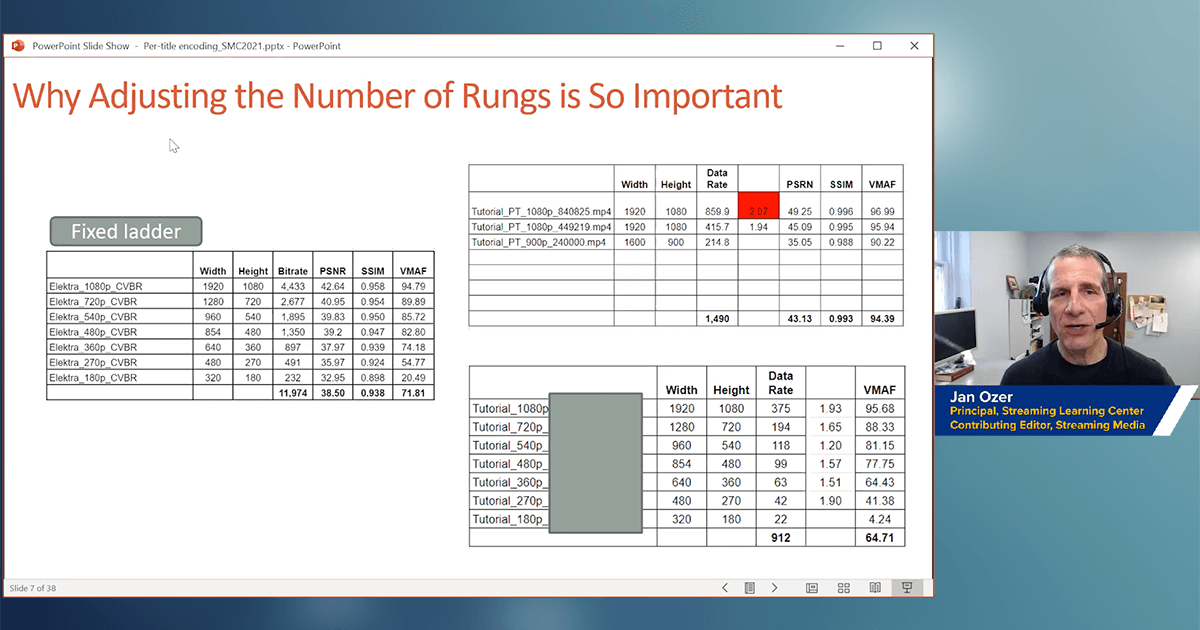 How Many Rungs on Your Encoding Ladder?

Streaming Learning Center’s Jan Ozer explains the importance of adjusting the rungs on your encoding ladder in this clip from his presentation at Streaming Media Connect 2021. 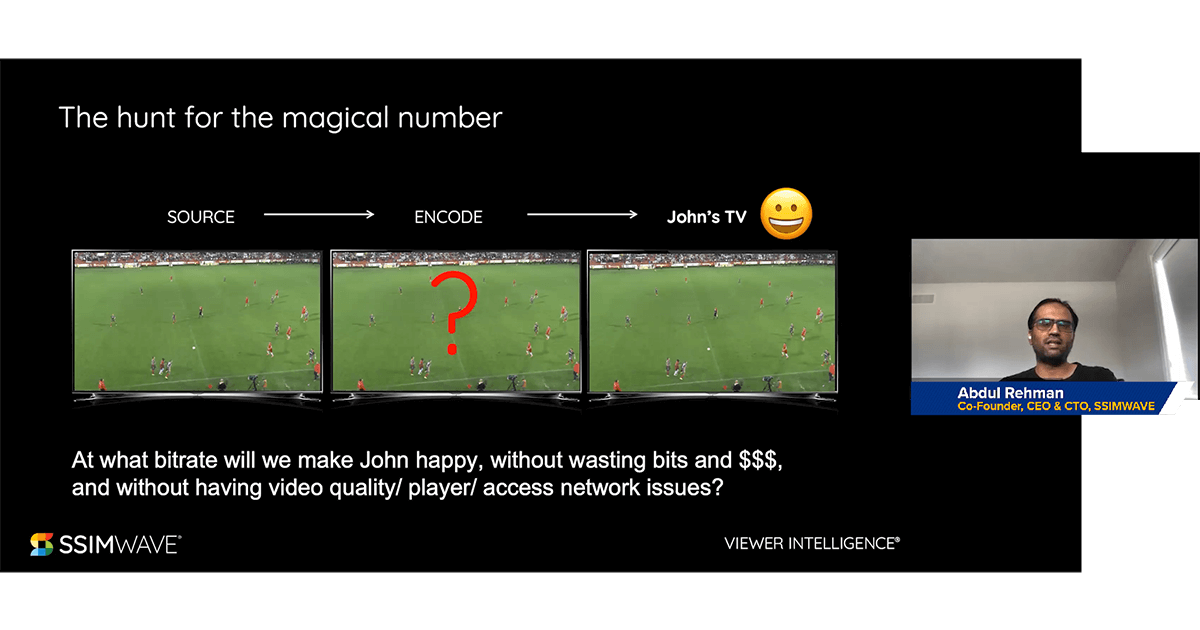 How to Balance Encoding Bitrate and Streaming Quality

SSIMWAVE CEO Abdul Rehman discusses the search for the magic number at which streaming quality is high enough to please the audience and bitrate is low enough to ensure successful and cost-effective delivery in this clip from Streaming Media West Connect.

Beyond Bollywood: RRR and the future of Indian film

Beyond Bollywood: RRR and the future of Indian film

Where do Kansas City Chiefs stand ahead of Week 9?

The Weeknd shares new Avatar song, ‘Nothing is Lost (You Give Me Strength)’